Spinogenix is developing a new class of therapeutics to restore memory and motor functions lost in neurodegenerative and psychiatric diseases.

In most neurodegenerative diseases we lose connections - synapses – between neurons, a process that contributes to declines in cognition and motor function that characterize these diseases. At Spinogenix we are developing first-in-class, novel small molecule drugs (SPGs) that restore synapses to improve and potentially restore cognitive and motor function. Our approach is unique for diseases of the central nervous system.

In contrast to much research focused on alleviating the symptoms of neurodegenerative disease, we seek to develop therapies that impact the underlying disease and fundamentally change treatment paradigms by restoring neuronal connections regardless of the underlying cause of synapse loss. Spinogenix has discovered compounds (SPGs) that restore lost synapses. We have demonstrated the effectiveness of these “spinogenic” molecules in cells and in multiple animal models of neurodegeneration. SPGs have a novel molecular target and their mechanism of action is well understood and unique. This mechanism would be operative in all diseases where synapse loss occurs, irrespective of the pathological basis of synapse loss.

Our lead compound is a small, orally bioavailable, brain penetrant molecule which works at nanomolar concentrations and has a wide therapeutic window. The lead compound has shown efficacy in multiple animal models as well as in human patient-derived iPSC cell lines.

Our initial indication is ALS (a.k.a. Lou Gehrig’s disease), a devastating and almost always fatal neurodegenerative condition. ALS primarily affects the motor system, but it can also lead to cognitive decline in up to 50% of patients. Recent data indicate that a loss of dendritic spine synapses is an early and progressive feature of ALS pathogenesis that may contribute to both motor and cognitive symptoms. Current therapies are not disease modifying and afford only a modest extension of lifespan, with no reversal of symptom progression. We are planning to evaluate our lead compound for the treatment of motor and cognitive function of ALS, an FDA designated orphan disease.

Accumulating evidence suggests that deficits in dendritic spine synapses are associated with variety of neurological and psychiatric diseases, such as Alzheimer’s disease, Parkinson’s disease, ALS, schizophrenia, and depression. Therefore, promoting dendritic spine genesis may represent a promising therapeutic strategy for the treatment of multiple diseases: 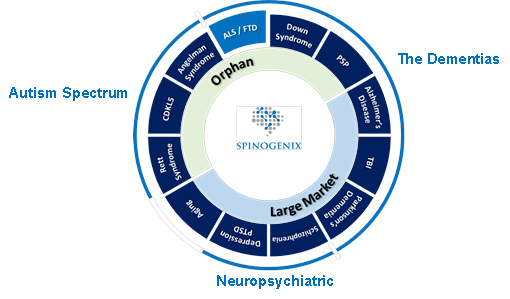 SAN DIEGO, Calif., Jan. 05, 2021 (GLOBE NEWSWIRE) - Spinogenix, Inc. a preclinical-stage biopharmaceutical company developing novel small molecule drugs for neurological conditions, today announced that it will be collaborating with Dr. Rita Sattler at the Barrow Neurological Institute and Dr. Justin Ichida at the USC Keck School of Medicine on a grant awarded from the U.S. Department of Defense’s (“DOD”) Congressionally Directed Medical Research Programs (“CDMRP”) to evaluate its lead development candidate in ALS. The DOD grant will be used to study the effects of Spinogenix’s lead compound in human iPSCs (induced pluripotent stem cells) from patients with ALS and from healthy volunteers. Additional experiments will be conducted in animal models of ALS.

Spinogenix’s lead drug candidate has a unique mechanism of action wherein it induces an increase in synapses, the key connections between neurons that allow us to think, plan, remember and control motor functions, faculties that are diminished in neurodegenerative diseases including ALS. “We are pleased that the DoD has recognized the potential of our novel drug candidate to change the course of disease progression in ALS,” stated Stella Sarraf, Ph.D., Founding Chief Executive Officer at Spinogenix.

There is an unmet need for new innovative therapeutics for ALS (Lou Gehrig’s disease) which is almost invariably fatal within 3-5 years of diagnosis. The therapies that are currently approved for ALS provide very modest extension of life of several months and are not well tolerated by all patients.

Dr. Merit Cudkowicz, Director of the Sean M. Healey and AMG Center for ALS at Mass General Hospital, commented, “Spinogenix’s novel approach has the potential to demonstrate that replacing lost synapses may result in drugs that can provide a meaningful benefit for patients with ALS.”

Spinogenix was founded in 2016 with the mission to develop transformative therapeutics for diseases involving synaptic loss and dysfunction. Our drugs are designed to regenerate synapses to reverse declines in cognitive and motor function to impact the disease and fundamentally change treatment paradigms by restoring neuronal connections regardless of the underlying cause of synapse loss. Synapse loss is associated with a variety of neurological and psychiatric diseases, such as ALS, Alzheimer’s disease, Parkinson’s disease, schizophrenia, and depression.

AD is a degenerative brain disease and the most common cause of dementia - accounting for an estimated 60 to 80 percent of dementia cases. The Alzheimer’s Association 2018 Report estimates that there will be 5.7 million people with dementia in the United States in 2018 with an estimated 14 million new cases of dementia by 2050, equivalent to one person every 3.2 seconds.

“Spinogenix is extremely pleased to receive this grant award which provides rigorous peer-reviewed validation of our innovative approach to tackle AD. This funding will help us further develop our drug candidates and bring a promising new class of therapeutics to the marketplace to treat not only AD but also related diseases that involve a loss of dendritic spine synapses”, said Stella Sarraf, Ph.D., Founder and Acting Chief Executive Officer.

“Loss of dendritic spines is a major driver of cognitive decline in all neurodegenerative diseases as well as normal aging,” said Franz Hefti, Chairman of the Board. “Spinogenix is targeting the loci of changes underlying memory formation.”

Currently, none of the available treatments for AD or other neurodegenerative diseases reverse synapse loss. With the support of this NIH grant, Spinogenix aims to further develop a new class of neurorestorative therapeutics to help treat patients with AD.

Spinogenix was founded in 2016 to address the urgent clinical need for novel drugs to combat diseases and conditions involving synaptic aging and loss. Our neurorestorative compounds are designed to restore synapses in order to enhance brain connections and improve memory. Current development is focused on therapeutic treatments for AD and traumatic brain injury/concussion. More information on Spinogenix can be found at www.spinogenix.com.